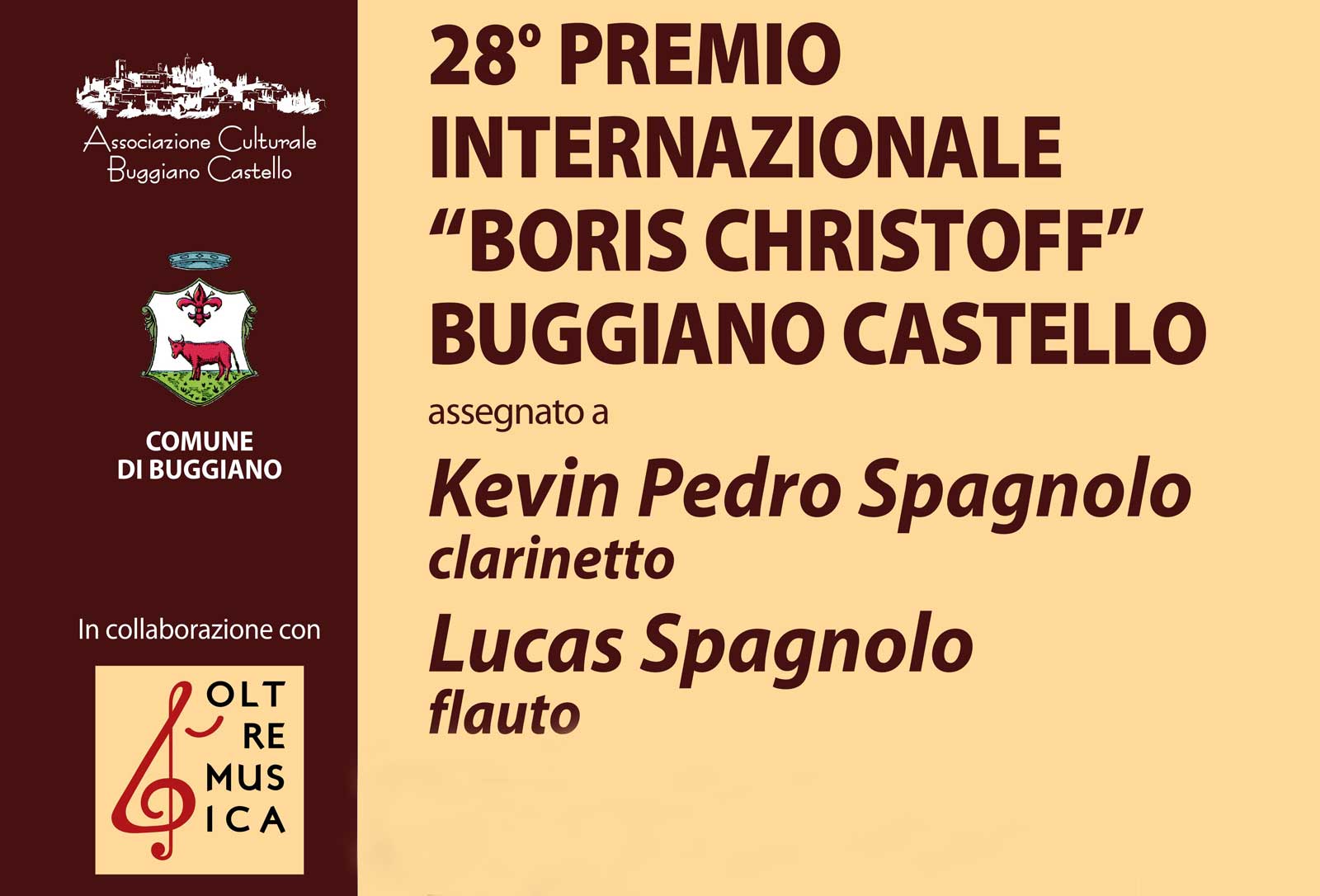 During the evening they will perform with music by Saint Saens, Debussy, Poulenc, Shostakovic and Stravinsky.

Kevin Pedro Spagnolo. Winner of the First Prize of the prestigious competition in Geneva in 2018 at only 22 years, Kevin Pedro Spanish (1996) is considered one of the youngest and most talented artists of his generation. Already winner of many other national and international competitions, including the Concours Internationale de Clarinette Jacques Lancelot et Ghent International Clarinet Competition, Kevin performs throughout Europe in Recitals with piano, as a soloist with orchestra and
in chamber music groups, with quartet and other wind instruments. Kevin began studying the clarinet at the age of eight at the Conservatory of Lucca, where he graduated in the class of Remo Pieri in 2013, with the highest marks and honorable mention. Later he studied with Carlo Failli and Fabrizio Meloni. In 2015 he began his Master of Arts with Romain Guyot at the Conservatory of Geneva, where he also completed his Master Soloist in 2019. He has played in recitals and various festivals with Carlos Sanchis, Chloe Ji-Yeong Mun, Theo Fouchenneret, Quatour Voce, in the Montpellier Festival, Jeunes Talents in Paris, Concerts d’été de saint Germain in Geneva, Festival de les Haudères, Philharmonic of Rovereto and many others, also for radio broadcasts on Radio France, Rai Radio 3, Radio Télévision Suisse. He has performed as a soloist, proposing classical repertoires, modern and contemporary, with L’Orchestra de Aguascalientes, Orchestre de la Normandie a Rouen, Orchestre de Chambre de Genève, Bruxelles Philharmonic, Orchestra del Teatro Mariinsky a San Pietroburgo, Swedish Chamber Orchestra, Orchestra della Toscana. In 2021 he will release his first solo CD, with the Swedish Chamber Orchestra, sponsored by
Breguet and the Geneva Competition, with music by G. Rossini, C.M. von Weber and Jean Françaix. The CD will focus on the different characters of the composers, and the various facets of the artist, having a dual identity, Italian and German, and a third French nuance, due to his studies in Geneva. In 2019, Kevin played as First Clarinet at the Swedish Chamber Orchestra, with conductor Martin Fröst. As an orchestral Kevin has had experiences as First Clarinet
with orchestras such as: Orchestra del Teatro alla Scala, Filarmonica del Teatro alla Scala, Orchestra Regionale Toscana, Verbier Chamber Orchestra, Teatro San Carlo di Napoli, Malmö Symphony Orchestra, Orchestra Leonore, and in youth orchestras such as Verbier Festival, Gustav Mahler Jugendorchester, Italian Youth Orchestra. He was directed by Valery Gergiev, Christopher Eschenbach, Juraj Valcuha, Marc Soustrot, Martin Sieghart, Herbert Blomstedt, Simon Rattle, Gábor Tákacs Nagy, Esa-Pekka Salonen, Charles Dutoit, Gianandrea Noseda among others. With exceptional control of the instrument, Kevin Spagnolo is known for his spontaneity and pursuit of freedom, pushing his abilities to the limits of the possible. Curious and thirsty for music, trying to share his emotions with the audience, he always faces and seeks new repertoires, as demonstrated by his recent passion for chamber music, Jazz and Klezmer.

Lucas Spagnolo was born in Lucca on June 21, 2001. In 2009 he joined the class of Prof. Filippo Rogai at the Istituto Superiore di Studi Musicali, Luigi Boccherini “where he subsequently graduated in 2020 with the highest marks, praise and honorable mention. At the same time he studied in Florence with Prof. Michele Marasco from 2016 to 2018.

In 2018 he joined the class of Prof. Andrea Lieberknecht as “jungstudent” at the Hochschule für Musik und Theater München and from October 2020 begins the Master with her. Lucas and winner of various competitions such as: first prize Riviera della Versilia”, first prize Riviera Etrusca”, third prize at the competition “Premio Köhler”, first prize absolute, 6. Regional Music Competition Lions District 108LA”, First Prize Overall Award
Crescendo“ Cat. A, Absolute First Prize Crescendo Award” Cat. B, first prize at the Giuseppe Peloso competition”, first prize at the international flute competition Severino Gazzelloni” Cat. A with 3 special prizes. In 2019 he was part of the Italian Youth Orchestra (OGI) for summer projects. In March 2021, Lucas won the academy position at the Royal Stockholm Philharmonic Orchestra and in the following month, at the age of 19, he won the first flute position at the Beethoven Orchester Bonn.