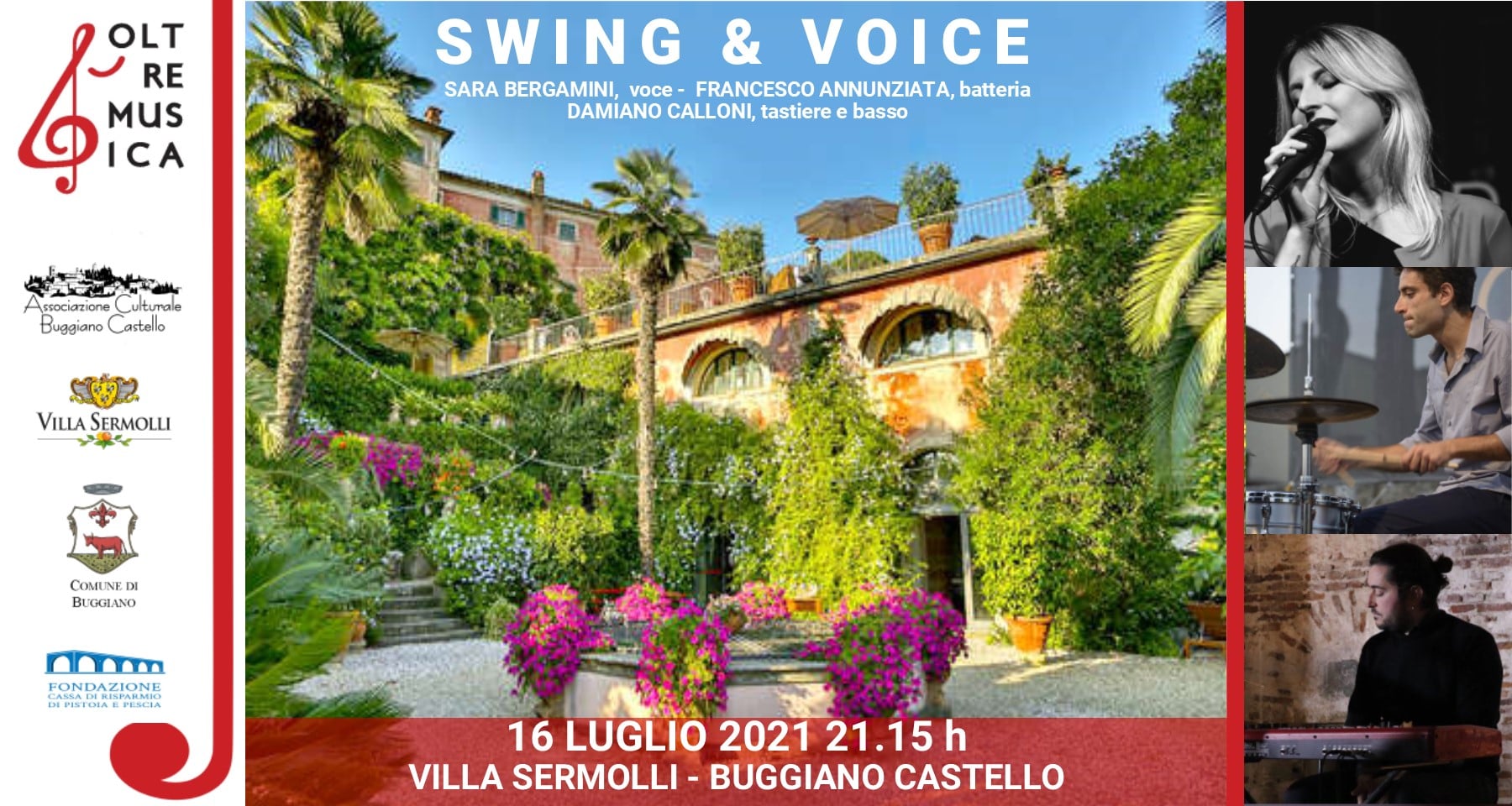 The ticket includes a welcome drink at the Garden of Villa Sermolli.

A journey through the most beautiful songs, from the Beatles to Radiohead with:

A journey through the most beautiful and significant songs of modern music: a journey made of sounds and emotions that has its roots in the American and English tradition but also in its most international declinations. This journey starts from the Beatles, passing by Stevie Wonder and Radiohead, revised in a jazzy key, and with soft and sophisticated sounds, in a perfect mix of up-tempo, medium-swing and ballad to please the most refined listeners, but also those who approach Jazz for the first time. The songs transform, dilate their structures arriving at improvisations originally foreign to the song form. It is here that the world of music, rock and jazz blend, in a unique and particular way, that distinguishes the unique sound of this project.

Sara Bergamini. Singer-songwriter and performer, at the age of ten he began to study piano and modern singing. He began to approach jazz in 2008 thanks to the musical movement of Barga, in particular thanks to M Giancarlo Rizzardi, founder of the Barga Jazz Festival. He attended the three-year academic Jazz Singing at the Conservatory of Livorno directed by Mauro Grossi, is part of the “Jubilum Jazz Chorus” directed by Piero Gaddi, takes care of various acoustic projects and teaches singing in some music schools in his area. She joined the project of the “Campus della Musica”, directed by Claudio Fabi, in 2016. Growing up listening to Chopin and Zucchero, influenced by the sounds of Celtic music and jazz, his style and character remain strongly linked to the rock of his beloved Beatles, pop rock and contemporary songwriting. He manages to mix all these wonders to create his own recipe, expressing himself with a mostly acoustic sound with a bit of Country nuances.

Francesco Annunziata. Born in 1989, he approached music at the age of 17 by taking lessons on drums with the maestro Paolo “Nipa” Ninci , so in 2006/2007 he made some live experiences with various bands from Elba, mostly cover rock band. In 2009 he obtained a certificate of 3 students at the Music Academy in Portoferraio (LI). In this period he began to collaborate with the band “Dyatriba”, in the writing of unreleased songs, then re-proposed live. He decided to continue his studies, enrolling in the advanced course “Bachelor of Art, Music Performance” of the University of Essex at the Jam Academy in Lucca, studying with various masters including: Matteo Sodini, Andrea Spinetti, Fabrizio Bertolucci, Marco Bachi, Valerio Silvestro. NIn 2013 he obtained the title by presenting the Specialized Project at the Music Academy in Bologna, which also includes professors from the University of Essex. In 2011 he began collaborating as a teacher of drums at the various Music Academy locations in Portoferraio, Lucca, Pisa and Sarzana. There are many live activities in this period especially with the band “Mo&toyboys” (soul, R&B, funk) and several live in various areas of Italy with the well-known Ligabue cover band “Brama Buriana” in which often plays as a guest guitarist Max Cottafavi (Ligabue). In 2014 he studied with maestro Walter Paoli (Bollani, Rava the group Area, etc.) In 2015 he studied and collaborated with maestro Riccardo Arrighini, with whom he will then perform at the Massarosa Jazz Festival. During this period he taught at some music schools including Inmusica (Lucca), Music Box (Viareggio), Jam Garfagnana (Pievefosciana), Bschool (Lucca). The musical projects in which he participates in these years are: “Just3” with which he proposes unpublished jazz written by pianist Daniele Aiello, double bass Matteo Bonti; “Billy Rolls” proposing unpublished singer/ guitarist Marco Del Papa, member of the band also Fabrizio “Boba” Bertolucci on the bass. In recent years he is approaching the world of percussion, specifically the Cajon, developing a hybrid personal technique, between the traditional percussive and the more specific drumming. He began a collaboration with the company Del perseo Percussion, with which he organized several master classes in the structures where he teaches. He follows the musical project “Criminal Minds” acoustic trio, also continues his live activity with local artists, performing in various contexts. Since 2018 he has established the cultural musical association “Music Experience F.M.” with which he gives life to the project “Inmusica Viareggio”, a music school that offers modern music courses of the most common instruments, collaborating with the headquarters “Inmusica” of Lucca, a reality that has been operating for years, with to the assets various initiatives and events of thickness. He participated in Clinic and Master Class with Christian Mayer, Bruno Farinelli, Max Govoni, Luca Capitani, Jojo Mayer, Steve Smith, Benny Greb, Chris Choleman, Giovanni Giorgi, Gavin Harrison, Aaron Spears.

Damiano Calloni. He was born in Lucca on July 21, 1985. He began to study the piano at the age of six, first as a self-taught and starting from eight years under the guidance of Prof. Maria Simonetta Pardini, at the Design and Production Center Music/ Theater “The Old Mill”. Prosegue il suo percorso di formazione con la Prof. Rosalba Fratus studiando il piano classico e conseguendo la Licenza di Teoria e Solfeggio presso il Conservatorio “Boccherini” di Lucca. In 2009 he participated with my group in the project CSA (Centro Sviluppo Artisti), followed by Francesco Sighieri. The extremely positive experience will lead the band to rank second nationwide among more than nine hundred emerging groups participating in the competition. He began studying the Piano Jazz around twenty years under the guidance of M. Piero Frassi and later studying with M.Valerio Silvestro. He deepens the study of the Hammond organ with Mº Maurizio Spampani studying the most important organ techniques Jazz, Funk, Blues and Pop. He attends the Triennium of Degree in Piano Jazz at the Conservatory Mascagni of Livorno, studying with Mauro Grossi and which will end in September 2017. He continues to specialize in the use of electronic keyboards and piano in both Jazz and Pop contexts with Jovanotti’s pianist, Franco Santarnecchi. From 2012 to 2014 he was a keyboardist and pianist live and in the studio of Florentine singer-songwriter Emy Berti with whom he recorded the Album The Change. He collaborates with Steve Luchi, keyboardist of J Ax, since 2013. Dal 2014 al 2016 è tastierista del semifinalista di The Voice Of Italy, Dylan Magon.dal 2018 è il tastierista per il sosia Spagnolo di Michael Jackson, Sergio Cortes. The Tour will touch countries such as Dubai, Mexico, Chile, Argentina, Latvia, Russia, Ukraine, Switzerland, flanking the dates abroad with some of the main Italian theaters (Milan, Turin, Bologna, Montecatini, Venice)